We Demonstrate with an Example

How teachers’ seminars on human rights were started and why it became rather dangerous to conduct them in the North Caucasus, said Lilia Yusupova, Regional Project Coordinator and Head of the office of Human Rights Centre “Memorial”, Gudermes. 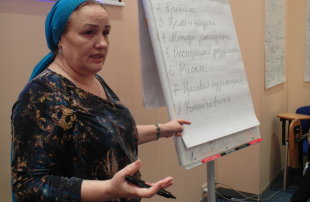 – Tell us, please, how the program started?

— I could say that I was a pioneer of the program. Since 2000 I have worked for Memorial, managing the Gudermes office. In some time I began to realize that we operated as an “emergency aid”. We responded to what had already happened, tried to help, but could not prevent anything. And then I started talking about the necessity of supporters at the local level, of awareness campaign on human rights for local people, for them to be aware of their rights and who they should approach if necessary. When the Norwegian Helsinki Committee appeared in the region with its international program of Human Rights Education – the first seminar took place in 2009 — they approached us and asked if we wanted to participate. My colleagues proposed me for the position of coordinator since I was the one who kept talking about this kind of activities, long before the separate funding became available; I understood that our human rights work should be diversified. We have never had an educational component before. For some reason Memorial hasn’t joined in at once, yet the Civic Assistance Committee promptly backed up the idea that is why the project started on the basis of the Committee.

What changes have the program undergone within these years?

— The program was based on the program of Norwegian Helsinki Committee; however, since 2009 it has changed a lot. We added new components, discussed important matters. At the beginning of 2014 we started a youth group, a separate one. Before that we introduced training in different human rights organizations – we realized that there were people who wished to deal with these subjects in depth and adopt our experience.

– Why do you held the seminars in Moscow?

— The situation became insecure in the Caucasus. These people can’t feel safe there. The seminar’s program expects people to speak up, to cover some regional problems, and it is a vital necessity to have safe environment for discussing such matters. Even introductory seminar for Chechen young people we didn’t have in Grozny, it takes place outside – Nalchik or Ossetia, the situation is more peaceful there.

– Now there are two Moscow seminars, one – for teachers and one – for young people. Why these groups? How do you select participants?

— First we select young people in regions and conduct several introductory seminars, then we chose the best ones and take them to Moscow. As for teachers we bring them here at once because they are very busy and most of them have no opportunity to take part in two-three events within a year. Why in particular teachers and young people? It is simple: young people – because they should change something in the society, teachers – because they transmit this knowledge, they continue our enlightenment mission. The seminar for teachers focuses on teaching methods and human rights; the youth seminar is more about activism.

– What regional problems does seminar help to solve?

— As for changing the situation globally we certainly can’t do it. Yet, please, understand that we want to get these ideas across people’s mind, to let them see the overall picture. For them to understand the role of authorities, of the civil society, to learn the mechanism of pressure on authorities. Fortunately, both young people and teachers take very well what we tell them; there is a favorable atmosphere created in the region for receiving such information much-needed by people. After our seminars, their participants get together, organize some groups and start some activities. Some people even start their public organizations.

– You mentioned that since 2009 the situation in the region had changed a lot. What happens there now?

— It is true, the situation is changing, and a crackdown started, and we feel it in Moscow too. Before it has been easy for Svetlana Alexeyevna (Svetlana Gannushkina is the president of the Civic Assistance Committee – the author’s note) to meet with the President, we could work independently, could hire staff. Now we are partially in the underground. The situation is different in different regions: in Ingushetia there is less obstacles for our work, in North Ossetia it looks like the Soviet Union has returned, and as for Chechnya… it goes without comment. They are neighboring republics; however the situation is very different there. We have to function tactfully, even restricting these young men’s initiatives. For them to realize that it could be rather dangerous. We don’t even encourage them to take part in training or volunteering in Memorial, we have them focused on other organizations. At the same time we make them realize that at least something could be done, encourage them not to stay indifferent but take action. Not necessarily human right defending but any civil activities. With the example of our organizations we demonstrate that it is possible.