In November took place a seminar on human rights in the North Caucasus for teachers of three republics – Chechnya, Ingushetia and North Ossetia. Participants shared their impressions and talked about useful information they received. 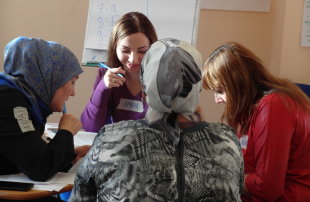 — I came here for the first time; the proposed topics seemed very interesting and I sent along an application form. Now I teach History and Social Studies at school and the information I received here I could use during my lessons. I was fascinated by role playing technique we were taught with – I could teach my students the same way.

Definitely, the knowledge of project work will be useful. Many problems that we have in our village could be solved if funding is found. For example, there is no place for children to play in the small mountain village – neither playgrounds, no football field.

During the seminar were described various cases of violation of laws by officials or authorities. Officially, we live in democracy, the separation of powers does exist, one power should control the other one – unfortunately, it doesn’t work in practice, there are many problems in judicial system, in particular, where pure arbitrariness reigns. Decisions are made based not on legislation but some subjective impulse.
I talk to students about it, seniors, – they already can understand it. Here I have learned a lot and will be able to share it.
Natalya Kisseleva, North Ossetia, Vladikavkaz.
Now I run an agency for field events for children, in the past I used to work as a counselor for Doveriye Centre, but now I engage in commercial activities.

I was excited about being accepted for this program – I am a teacher by profession but now I do not work as a teacher and thought that only staff members of budget organizations were admissible. However, I was very much interested and carefully filled in a questionnaire – and I was invited. It came as a great surprise!

I want to pass my sincere thanks to those teaching during the seminar, especially, Olga and Vsevolod. They are teachers and experts, representatives of our social sphere. They spoke about the very current issues of our work and life that we were focusing on – shut-down of schools; film about Zelim also spoke to our very depth. I liked a tour to Memorial Human Rights Centre as well as tours around Moscow with a guide.

What am I going to do when at home? Probably, I will put into practice what I learned here. For many years we have been working together with kindergartens and schools, also I am a student of College for Culture. It is important to address those problems we can solve and try to do it. They do exist – for instance, in Doveriye Centre we used to work with refugees from Beslan with difficulties in adaptation due to the language barrier; young mothers are very vulnerable as well, we need to help them when possible.
Malika Shakhtyrova, Ingushetia, Nazran
— I work at school as a teacher of English. I attend such a seminar for the first time. I was fascinated by everyone who worked with us.

I found interactive technologies very useful – for work with children at school – they make training process much more interesting and diverting.

Today’s class on project management seems very practical to me. Our region suffers from many problems and there are problems we could solve if we act wisely.

What was told to us about human rights I have known before, in general. But it was good to refresh my memory.