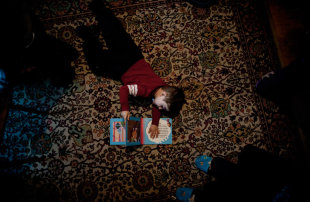 NOGINSK, Moscow region — As members of the government and opposition of war-torn Syria met in Moscow on Thursday in the latest attempt to reach a political settlement, in a small rundown house outside of Moscow, a dozen young Syrian children sat around tables reciting the Arabic alphabet and learning to find their devastated homeland on a map.

They fled a nearly four-year war that has claimed more than 200, 000 lives, but they still aren’t in the clear: Unlike their Ukrainian counterparts, they have not been granted a simplified procedure for receiving asylum in Russia.
See the photo gallery: Syrian Refugee Children Attend Makeshift School in the Moscow Region
“Some of these kids fled after seeing terrible things, some had it a bit better. But they have all learned to look at the situation as temporary, just a matter of time, ” said Muez Abu Aljadael, a Syrian journalist and activist who has lived in Russia for more than a decade and who has set up a makeshift school in the Moscow region town of Noginsk for Syrian refugee children.

Most of them face an uphill battle — even with Abu Aljadael’s support — since without asylum, their lives are left on hold. 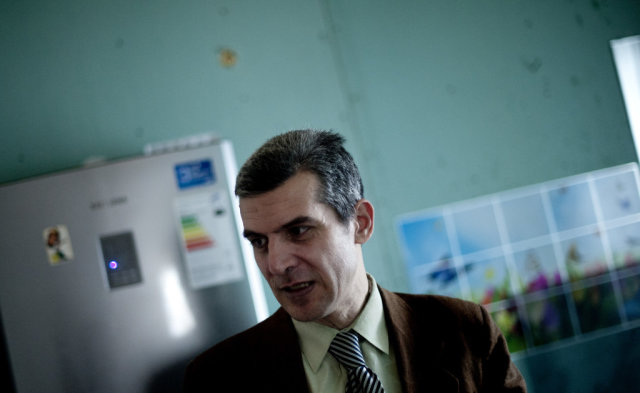 Several Syrian refugees connected to the school who did manage to receive asylum said they had paid a large sum of money for it.

“Sometimes they would be tricked. The refugee would think they were paying a one-off fee, but then more and more money would be demanded, ” he said.

“Now they’re just refusing them. Or a person pays and then gets kicked out anyway, ” Abu Aljadael said.

Russian law defines a refugee as any person outside of his or her own country who has a well-founded fear of persecution back home and no means of protection there. It is up to officials from the Federal Migration Service to determine whether applicants meet the criteria to receive temporary asylum.

Increasingly often, however, refugees from Syria are being told they do not meet the criteria without being given any proper explanation as to why, Abu Aljadael said.

Some of the explanations for the refusals were downright absurd, he said, with the applicants being told they weren’t in any danger back home and therefore didn’t need asylum.

“It’s like their logic is, ‘Well, there’s an airport still working in Latakia, so it must be safe.’ But there are at least 5 million displaced persons inside Syria, and that’s just inside the country, ” he said. 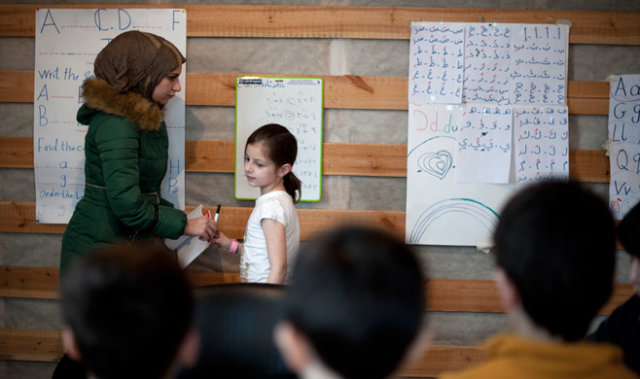 “The reasons are almost always contrived, ” Yelena Burtina from Civic Assistance, a group that seeks to help refugees, said in comments to Russian Reporter magazine in November.

“For example, say a refugee still has relatives in Syria, that [supposedly] means this person is not in danger. But who said this person’s relatives weren’t in danger? … Or another popular explanation for the refusals: ‘[The applicant] has not been involved in violent incidents, they have not been subjected to criminal persecution, police are not searching for them, so they will not be a victim of persecution if they are returned to their country.’”

Yasser, a 24-year-old from Aleppo who sometimes helps out at the school and who declined to give his surname, said he had come to Russia before the war broke out and could not return now while the conflict continues. He said he hadn’t had any trouble with migration officials.

When asked why he believed the asylum procedure hadn’t been simplified for Syrians, whereas it had been for Ukrainians, Yasser said: “Well, we don’t speak Russian like they do. They have no use for us.”

Factory owners and other employers often act as the intermediaries in securing temporary asylum for Syrian refugees, which leaves them open to scams and labor exploitation.

“We don’t even see the money, ” said 28-year-old Anas in comments to Russian Reporter magazine in November. “They just take it out of the paycheck. The factory owner pays some intermediary, and then that person is in touch with the migration service.”

A representative for the Federal Migration Service who identified herself only as Olga denied that migration officials were taking bribes to grant asylum, saying such deals likely involved commercial companies or other intermediaries, not officials.

Vyacheslav Postavnin, the former deputy director of the Federal Migration Service and now the president of the Migration in the 21st Century foundation, laughed when asked whether the asylum process ever required fees as large as those paid by Syrian refugees.

“It’s different for Ukrainians for political reasons. For everyone else, it’s nearly impossible to even get in to the FMS. They [the refugees] live in terrible conditions, spend weeks, months going back and forth to the FMS [to get progress on their case]. That’s why they end up paying huge sums, ” he said.

A Rock and a Hard Place

Last spring, Vladimir Rucheikov, head of the Federal Migration Service’s department on asylum issues, told journalists that almost all Syrian refugees who had sought asylum in Russia had received it.

“Almost all Syrians receive temporary asylum in Russia for humanitarian reasons. … Russia doesn’t share a border with Syria, unlike Turkey and Lebanon, where there are hundreds of thousands of Syrians now. … Nevertheless, there is a fairly large number [of Syrians] in Russia now, ” Rucheikov was cited as saying by Rosbalt.ru at the time. 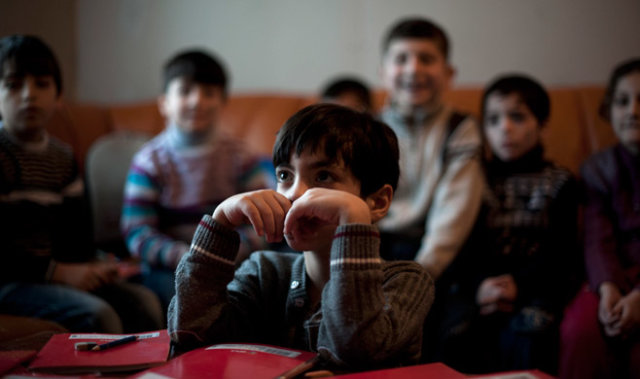 Nearly a year later, Abu Aljadael put the number of Syrians living in the Moscow region at around 3, 000, with some of them legal, though more of them not. The community, accordingly, mostly keeps to itself.

Many Syrians came to Russia because it had traditionally been easy to secure a business visa, when business between Syrians and Circassians was flourishing prior to the Syrian conflict, Abu Aljadael said.

Thousands of Syrians have ties to Russia’s North Caucasus, which saw a mass exodus of ethnic Circassians during the Russian-Circassian wars of 1763-1864. Even before the Syrian conflict, activists had long called for Russia to take steps to repatriate Circassians who wanted to return home.

So when the time came to escape, for many refugees, Russia seemed like a natural choice.

But some Syrian families have failed to find sanctuary here, moving on to Germany or other parts of Europe, while others, faced with extortion by officials and employers in Russia, have even decided to take the risk of going back home, Abu Aljadael said.

“We had one case where a Syrian man found work at a factory but then the factory owner stopped paying him. When he confronted his boss, he was told, ‘What are you going to do? Go back to Syria?’” Abu Aljadael said.

The kids, between the ages of 7 and 13, eagerly learn Arabic, English and Russian, as well as Math and History.

Asylum applicants are often also reluctant to disclose their real reasons for leaving home because they believe Russia backs the regime of President Bashar Assad and all that it does, he said.

“They don’t want to say ‘Assad’s forces bombed my home’ because they believe Russian officials won’t like that somehow, ” Abu Aljadael said.

Throughout the Syrian conflict, Russia has repeatedly blocked members of the United Nations Security Council from passing resolutions condemning Assad’s actions, thereby gaining the reputation as one of its main allies.

Mahmoud al-Hamza, president of the National Council of the Damascus Declaration Abroad, an umbrella organization of various Syrian opposition groups, said he had encountered cases in which Syrian refugees were asked about their political affiliations by Russian officials.

“If they openly said they were against Assad, they were given a much harder time [in the asylum process]. … Russia, unlike European countries, does not want to take in Syrian refugees, and the Syrians run into huge difficulties and bureaucratic headaches. There is also major corruption among [migration] officials. There’s no relief, no housing for Syrian refugees, and they have no rights. They just have nowhere to go, ” al-Hamza said.

Unable to continue their education back home, the Syrian kids at Abu Aljadael’s school — aged between 7 and 13 — find themselves trying to catch up with their peers so they can enroll in Russian schools if they do get asylum.

But without legal status, most of them are simply waiting for the war to end so they can return home.

A red-and-yellow minibus pulls up outside the school and the students head out the door in single file, ready to go home.

The bus is driven by one of the children’s parents, and much like everything else at the school, it’s a volunteer job. The only financing the school received came from Syrian businessmen, and the school’s teachers — themselves refugees from the war — receive no pay.

The Moscow government has so far taken no interest, said Abu Aljadael.

“I think there will probably eventually be questions [from the government], but for these kids to be without school for years, that is just a shame for Russia, ” he said, adding that he was expecting scrutiny from the government at some point.

The school started operating two months ago. The refugee teachers are keen to make sure the students don’t forget about their heritage or their history.

“We make sure they can find Syria on a map, that they know their history. … They are aware of what is happening back home, but they will get through it. 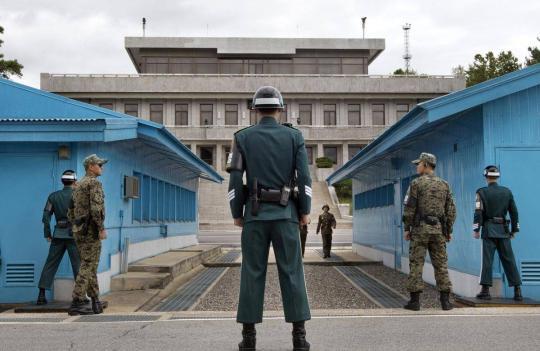