On December 5th Nesibeli Ibragimova, citizen of Kazakhstan, escaped from the grocery shop that belongs to Zhansulu Istanbekova. Late in December Nesibeli turned to the Civic Assistance Committee for help. Back in May she was invited to Moscow to work, during the first meeting the shop owner took Nesibeli’s documents. She was held captive in the shop and constantly beaten for 8 months. 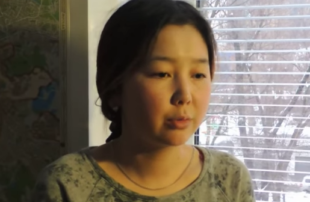 Nesebeli got trapped in the grocery shop the same way other victims did – when she was living in Kazakhstan she was offered a good job with stable paychecks in Moscow. In May 2016 Nesibeli arrived in the city where she was met by acquaintances of Zhansulu Istanbekova, the grocery shop owner.

They said I would be working with vegetables and promised 30 thousand rubles as paycheck. Instead of answering my other questions they told me to go and not talk too much. The same day they took away my phone, Zhansulu said to put all belongings on the table or I would lose them. She told me she would give everything back later when I needed. I handed everything over to her – a touch-screen phone and a regular phone, the ID I came with. They took all my things, the whole suitcase, and told me to keep just one outfit. I didn’t have anything else left with me. I started working in the vegetable section without weekends.

Nesibeli got her phone back once a month so that she could talk to her mother, in the presence of the shop owner and only on speakerphone. Zhansulu watched the salves closely to make sure they didn’t complain to their relatives. Customers tried to warn Nesibeli about the shop, told her that it was dangerous there and that people were kept as slaves and beaten.

At first I didn’t believe any of those words but it changed after a while. We slept inside the shop, had old frozen bread and water instead of regular food and shurpa. We had to eat quickly. We were constantly beaten. Zhansulu did it herself. There is also Beka, the owner’s right hand.  She beats people too if Zhansulu orders her to. In the evening or at night Zhansulu makes everyone drink the cheapest and worst vodka.

Nesibeli ran away for the first time on September 17th. That day some workers were loading melons at the back entrance. Nesibeli ran out into the street as if to throw out rubbish. She hid in a café nearby for a few days, cleaning the place and washing the dishes, then decided to head to the “Sadovod” market. When she called her mother, the latter told her that Zhansulu was accusing Nesibeli of theft and threatening to go to court.

Nesibeli was quickly found at the market, Zhansulu contacted her. She tried to talk Nesibeli into coming back, promised that everything would be alright and that she would pay all that Nesibeli had earned. Zhansulu even resorted to threats, said she had put out an alert for Nesibeli since she had “no documents on her”.

She said she would reach me anywhere, said she had connections in the police and she could solve anything with money. I was scared, I had no choice, they would have found me and taken me away anyway. I came back on October 18th. At first they treated me okay but then they started beating me even harder. When it started snowing I got sick because of the open windows, got down with bad flu. Customers kept shouting at her to give me some warm clothes, kept asking her whether she felt sorry for me at all. I asked a lot of people to help me but they were all afraid of acting against Zhansulu.

They told me I could go back home in January,asked me to stay patient a little longer. In the evening they would pour us bad vodka, I sometimes forgot my name. You drink and fall asleep, you forget everything. On the night of December 5th I ran away again.

That day Nesibeli was beaten harder than usual, her face turned into a bruise, her arm was roughly injured near the shoulder. They threatened her with a knife so that she wouldn’t shout.

One day one of the customers left me her phone number in case I needed help. I asked her to come help me escape. She told me to go out into the the street where she later picked me up. As I was getting inside her car another car drove out to search for me. The woman dropped me near a subway station, I got out of the car. A girl was coming up from the station, I took her hand and asked her tearfully to help me or I would be killed. The girl promised to help me, hugged me and took me inside to her apartment entrance. I spent the whole day there, the girl brought me food. Then I asked her to help me find an organization that helps people escape slavery.

The girl who helped Nesibeli contacted the anti-slavery “Alternativa” movement. Their leader Oleg Melnikov came for Nesibeli almost right away, found a room for her, gave her clothes and food. The first day Nesibeli was taken to a first-aid station to have the injuries inspected and noted down. Members of the movement also collected money to help Nesibeli go back to Kazakhstan. On December 27th she filed a complaint with the emergency dispatcher of The Main Department of Internal Affairs of the city of Moscow.

The Civic Assistance Committee will be helping the victim together with “Memorial”. “We will be trying to initiate legal proceedings on grounds of bodily injuries”, says Gulnara Bobodzhanova, the lawyer. “I will be contacting the emergency dispatcher to inquire about the status of Nesibeli’s complaint. We are also planning to file a suit for recovering unpaid wages during her time in the shop”. Nesibeli’s complaint might be added to other victims’ claims in the European Court of Human Rights.

There are several stores like that in Moscow, all owned by the Istanbekov sisters – Sholpan, Zhanar and Zhansulu. The stores have been operating for 13 years now. All this time the owners have been keeping employees as slaves inflicting serious bodily injuries on them. All four women who came to “Civic assistance” for help earlier were raped in the stores. Three of them gave birth, one had abortion under the supervision of the owners’ daughter.

During inspections all slaves were kept in the warehouse or given someone else’s documents. Store owners were never prosecuted in Russia. A major joint campaign ran by “Civic Assistance” and “Amnesty International Swedish Section” which collected 5 000 signatures requesting the initiation of a criminal case didn’t succeed. Unlike in Russia, a criminal case was opened up in Kazakhstan. Our colleagues from the non-governmental organizations “Sana Sezim” told us that Zhanar Istanbekova changed her ID and became Omarova Saule Inkarovna. She was probably trying to escape prosecution in Russia this way.