Now a few reminds about events which took place two years ago when beating of a policeman at Matveevskiy market provoked a wide scale discussion in media. But laws, adopted against that background, are still in effect. Konstantin Troitsky, Head of Monitoring Group of Civic Assistance Committee, analized legal practice, developed in Moscow for this time. 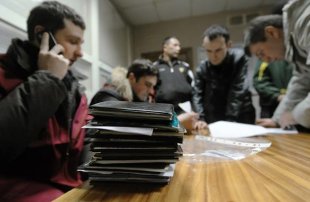 The result of these changes and legal and executive practice, formed on its ground, is multiple increase of people, deported from Russia with a subsequent bun of entry. According to the Сourt Department, for the year 2012 a total number of such court decisions was 45227, in 2013, this number was already 137097 and in 2014 these decisions reached a number of 198371. Thus, since 2012 the number of expulsions has increased more than fourfold. In total, Russian courts have taken 380695 decisions on expulsions over the last three years. The vast majority of these decisions, namely 373554 or 98%, were adopted under article 18.8 and 18.10 of Administrative Code of the Russian Federation. Almost 30% of decisions on expulsions from Russia were taken in Moscow. 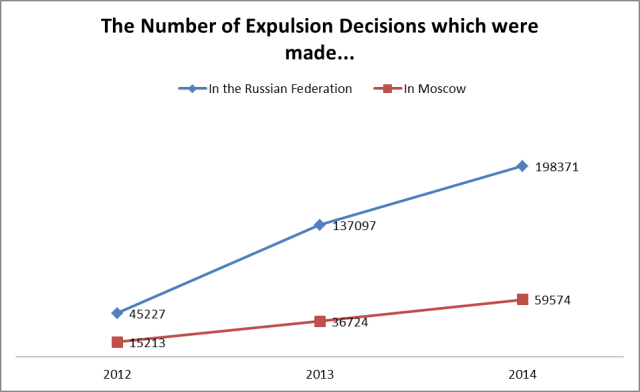 In total, over the past three years Moscow district courts made 111511 decisions. 110402 of them were adopted in accordance with the articles 18.8 and 18.10 of the Administrative Code of  the Russian Federation, that is 99% of the total number of expulsion decisions. In its turn, the otcome of 87%  of cases, examined under these articles, was expulsion. Regarding to remainig 13%; 3, 5% is return and termination of cases. And 9, 5% are the cases when a person was fined because he had relatives here or that person was from Ukraine. 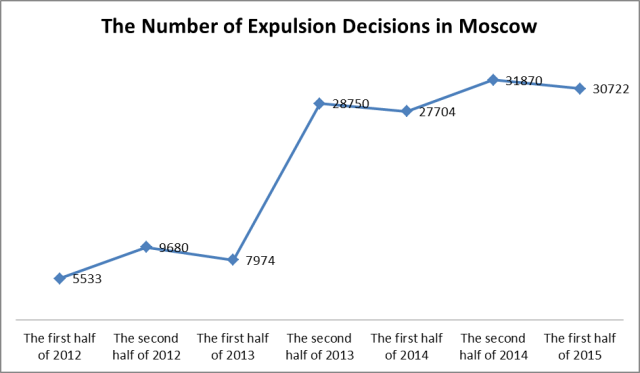 The number of expulsion decisions in Moscow for the years 2012-2014 on semi-annual basis (according to the data of the Judicial Department of the Russian Federation).

If we start from the number of expulsion decisions for the second half of 2014 (the number is 31870), it turns out that every working day Moscow district courts expelled an average of 245 persons. Imagine a Moscow multi-storeyed block, consisting of about 100 apartments. And for half a year it turns a whole neighborhood.

The consideration of administrative cases under Articles 18.8 Part 3 and 18.10 Part 2 of the Administrative Code of the Russian Federation is distributed unevenly in Moscow district courts. A number of courts deal with dozens of similar cases each month, but there are courts which examine few hundreds a month.

We have ranked thirty courts, basing on its official data. We haven’t included several courts in the ranking because these courts didn’t submit official statistics on their websites. By the way, cases under Articles 18.8 Part 3 and 18.10 Part 2 of the Administrative Code of the Russian Federation constitute an average 85% of all administrative cases before district courts.

Scherbinskiy court turned out to be the “champion”; 98% of more than 1600 cases, heard in first six months, concern foreign citizens; these were cases under Articles 18.8 Part 3 and 18.10 Part 2 of  the Administrative Code of the Russian Federation. The proportion exceeds 90% in a number of courts — in Basmanniy, Zuzinskiy, Koptevskiy, Cheremushkinskiy and Chertanovskiy courts.

Chertanovskiy district court turned out to be an absolute leader by the number of cases.  According to court official website, for the first six months of 2015 more than 2500 cases under above-mentioned articles have been heard in this court. Around 90% of these cases have been considered by one judge, namely by judge Andrey Vasilyev. On average, around 22 administrative cases concerning foreign citizens were examined in this court every working day.

The second place in the ranking was taken by Nagatinskiy court; for the same period of time around 1800 cases have been heard there. About 35% of all hearings were held by two judges: Olga Shumova and Oksana Chubarova.

The third and fourth places were taken by Golovinskiy and Scherbinskiy courts, which for the first six months of 2015 considered about 1700 and 1600 cases respectively. Golovinskiy court administrative cases were distributed among a number of judges, but the majority (about 65%) were considered by judge Sergey Bazarov. Judge Bazarov is also notable for the fact that he achieved the highest record on the number of expulsions of foreign citizens during one working day. Thus, on January 23, 2015, during a shortened Friday working day he examined cases and expelled from Russia 94 people! You can see this record on Golovinskiy court website.

In Scherbinskiy court more than 90% of all 1600 cases were considered by judge Marina Lipskaya.

As a part of Civic Assistance Committee project on monitoring of administrative cases under Articles 18.8 Part 3 and 18.10 Part 2 of the Administrative Code of the Russian Federation we visited 13 district courts.

Trial on these cases differed radically in different courts. In some courts cases were heard individually, in some of them in groups, cases were heard in half a minute or in fifteen minutes. In some courts rights, a protocol on administrative offence, decree and order of appeal were read, in some courts nothing of this was even mentioned. From a total of 13 courts, which observer was able to visit, only two courts followed all formal requirements of administrative cases hearings, which are indicated in Article 29 of the Administrative Code of the Russian Federation.

We were unable to visit hearings in three courts: in two cases we have been stopped by judge’s ban on the presence at hearings. And in one case a judge issued a decision without a trial.

We found out that the leaders of our ranking had the biggest disjuncture between procedural requirements and reality. So, in Chertanovskiy court the observer found about 20 foreign citizens, accompanied by police officer, who gathered in a hall. Then they all were invited in a small judgement hall. There were not enough chairs for everyone, so that some people were left standing throughout the hearing. The judge Alexandr Vasilyev didn’t read neither introduction, nor rights of persons, accused of administrative offences. Judge Vasilyev only asked a couple of short questions to each of all foreign citizens. That was the only thing he did. There was neither a reading of protocol on administrative offense, no explanations of the order of appeal. There was no even the announcement of decisions made, which later were passed to foreign citizens without explanations, already after the trial, in the hall.

The procedure of foreign nationals expulsion in Nagatinskiy court was very  similar, but there were even more violations. Our observer saw about 30 foreign citizens in a hall, accompanied by  police officers. After a while judge Oksana Chubarova invited a group of 15 people to enter the courtroom. Judge Chubarova announced that the detainees were living in a wrong place, without following any formalities like the announcement of the detainees’ rights and reading of the protocols of administrative detention. After that, without any interrogations, defendants were invited to sign a copy of a court order. Foreign citizens obeyed. Then they were given their passports and the texts of of the resolution, which Chubarova neither read nor clarified, of course. Unlike the trial in Chertanovkiy court, there was no even a brief interrogation of defendants. One of the detainees didn’t sign immediately the resolution and dared to ask for an interpreter, but the judge, speaking with a menace in voice, offered him two options: either to sign and go home or to go “for 48 hours in the police station”, while they would be looking for an interpreter. A police officer, standing nearby, advised to sign it. The resistance was broken and the detainee did what he was told to do. The whole procedure, resulted in expulsion of 30 people from Russia, took no more than 35 minutes.

In Golovinskiy court an observer was not even able to see the process. The judge Sergey Bazarov issued a decision of foreign citizen case without a trial. When the observer came into the court and saw a migrant under escort. Police officers reported, that there had not been the hearing on his case yet . Then the foreigner was brought to the judge’s secretary and in a minute he got out with a finished copy of the text of resolution. Answering the observer’s question, the secretery said that the judge took the decision in the chambers, and he himself only “signs”. He also added that if the observer desired to visit a trial with judge’s presence, it’s necessary to come in the morning. Apparently, it is the time when the judge consider cases under various articles, but not under Articles 18.8 Part 3 and 18.10 Part 2 of the Administrative Code of the Russian Federation.

In Scherbinskiy court the observer was not even allowed into the hall, where 15 Vietnam nationals had been guided in before. First, a bailiff rudely said that strangers have nothing to do at the hearing. Then he declared the meeting closed, probably just not having any idea of what that means. After the intervention of Federal Migration Service employee, accompanying foreign citizens, the judge invited the observer in the hall, which turned out to be even smaller than one in Chertanovkiy court. She denied the presence of our employee at the hearing, referring to lack of space. The very fact of “collective consideration” didn’t embarass the judge.

Out of the country!

The trial under Articles 18.8 Part 3 and 18.10 Part 2 of the Administrative Code of the Russian Federation can change a person’s life forever. Thefore it is so important to follow all the procedures, prescribed by law. But we see that the practice is extremely far from these procedures.

The vast majority of foreigners are brought to justice for the first time. But banal remark in the resolution’s text, “at assignment of punishment court takes into account the nature of the offense, the identity of the offender, his property status, circumstances, mitigating and aggravating his responsibility, ” and further: “not previously brought to administrative responsibility”, means little in the decisions under Articles 18.8 Part 3 and 18.10 Part 2 of the Administrative Code of the Russian Federation.

Everyone gets expelled: those who have no money for a ticket to go back home, those, who have no place to live at home, young and old, men and women. Only Ukranian citizens have chance to stay in Russia; and those who have close relatives here.

The grounds for punishment are different. Many decisions could hardly meet even  strict limits, established by law. Thus, district courts can expell people if at the moment of examination of documents they didn’t have migration card and/or passport. Even if later friends or relatives brought the documents in perfect order, it couldn’t convince judge not to expell a person. Forgot the document — out of the country. Here is the quote from judicial decree of judge Vasilyev: “He didn’t have neither passport nor migration card because he had left all the documents in the car. Later his friend brought the documents to the police station after the arrest.” So the man left his car for a while and then the police officer arrives. The man doesn’t have any documents. He asks to go and take them in the car, but instead he is brought to the police station. His friend brings the documents there. However, the process is already running, forgetfullness is punished by expulsion though there are valid documents on the table right before the judge.

That day judge Vasilyev expelled several people, using similar statements.  All the documents were delivered to the court later, but decisions remained unchanged.

At one of the hearings, in another court, a man was simply  begging a judge not to expel him from the country. He was able to pay a heavy fine only to stay in Russia, only not to lose his work. He explained that his family back home in Tajikistan was in distress, they were in desperate need of his small salary. He assured that he had already prolonged his patent. That was the end of January 2015, when the government couldn’t decide to recognize old-style patents or not. Eventually, they are recognized at the moment. But the judge was implacable. Having considered the case in less than ten minutes, she made the decision to fine and expell this man.

It is only a couple of very short scenes. Similar stories happen every working day in district courts, but nobody cares, passing by indifferently and, perhaps, believing that Russia is a hospitable country.