More than half a year ago the Supreme Court affirmed children’s right to education. But difficulties still arise. Paradoxically, the Civic Assistance Committee is forced to present an external organisation, bringing to schools’ attention the position of the Supreme Court and of the Ministry of Education. Fortunately, this strategy works. 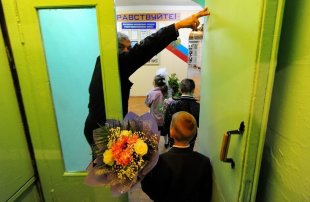 “We were asked: on what grounds should we take your child to school? You don’t have registration. They constantly bundled us away, tried to talk to us as little as possible. And so it went until my friend gave me Svetlana Gannushkina’s phone number. I talked to her, came to the Civic Assistance office and took there a copy of the Supreme Court’s decision, ” said Sergey Zhelezniy, a refugee from Gorlovka, East Ukraine. He, his wife Olesya and their son Nikita arrived in Moscow in 2015. Sergey arrived in summer and his wife and son in December. They still face great challenges; the family was able to apply neither for asylum nor for temporary residence permit due to officials’ denials and enormous queues.

“We are very grateful to the Committee. At the beginning, a school’s headteacher was absolutely definite; the child must have registration and must be registered exactly in the zone there the school is located. But now everything is fine. After Christmas holidays Nikita went to the fifth grade, he didn’t even miss anything, ” said Olesya Zheleznaya.

The second family, which could eventually enrol their child to school, continued to face difficulties even after the admission. Anastasiya Kravchenko is sixteen. She was admitted to the gymnasium №7 only after her parents had brought to the schools the copies of the Supreme Court’s decision, a letter from the Ministry of Education and a covering letter from the Civic Assistance Committee.

“Yes, we did it. But my daughter didn’t go to school, ” said Anastasiya’s father Alexander Zakharenko. “She was enrolled in the eighth grade, but she has already lost two years. She was studying in the eighth grade at home, then in the eighth grade in Chelyabinsk, where we used to live and now once again, eighth grade. The headteacher resisted our child’s admission for a long time, she was talking to us about the laws. But then we came with documents and she started to call the Ministry of Education. There she was told to admit our daughter to school. But she flatly refused to enrol Anastasiya in the ninth grade. Perhaps, she was afraid of bad graduation statistics.”

Parents decided to bring Anastasiya back to Ukraine, in the town of Artyomovsk, where her grandmother lives. Her father is sure the situation is now calm there unkile in his hometown Gorlovka: “If anything, we have relatives in Nikolayevka. She will finish school there. An then, after ninth grade she will come back to Moscow. We will stay in Moscow, we have another small child and I have a job here.”

According to the Civic Assistance employee Konstantin Troitsky, who is in charge of access to education issue in the Committee, this situation is a clear example that the problem of misinterpretation of Ministry of Education order №32 remains relevant. “Our appeal to the Supreme Court gave certain results, of course. Court’s decision can convince headteachers to admit children to schools. But it only proves that the problem remains. Obviously, Court’s decision didn’t receive proper spread among headteachers and other officials engaged in education.”

Since the beginning of 2014 110 families, facing problems with access to education, applied to the Committee. We were able to help in some cases. We know for sure that 56 families were able to solve the problem and children were admitted to schools. But the Committee didn’t conduct in-depth surveys. Therefore, it is not known how many children are deprived of their right to education on the ground of illegal requirement of registration.