Syrian children are being admitted to schools of Noginsk (town in the Moscow region).

Human rights activists’ efforts have been finally crowned with success; Syrian children are being admitted to schools of Noginsk (town in the Moscow region). Thus, on November 25, little Fatema has been enrolled in the second grade of school №17. And on Monday, December 7, two other children have been admitted to school №9. However, difficulties are not over yet. In particular, the Department of Education of Noginsk continues to impede children’s school enrollment. 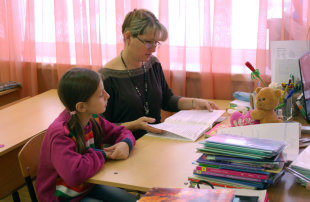 Civic Assistance Committee finally succeded in Noginsk; Syrian children are being admitted to regular schools. The Supreme Cour decision has changed the situation. Now even headteachers, denying access to school, refer to the Article 67 of the Federal Law “On Education in Russian Federation: “The access to the state or municipal educational organization can be denied only on the basis of its lack of availability.” Previously we were unable to establish a dialogue with Noginsk schools.

First child, who has been officilally enrolled in school, became 9-year-old Fatema Dzhassir. The girl speaks Russian fluently. Her mother says, that she has learnt the language, watching Russian TV. We know Fatema mother for long, she tought children English in volunteer school, organized by Syrian activist Muiz Abu Aldzhalail. There little Fatema improved her Russian.

Fatema went to the first grade of school №17. “The girl is older and, of course, considering her age, she had to go to the third grade. But after testing we realised, that she would have problems even in the second grade: she makes mistakes, completing tasks, sha can write in Russian only using block letters. But she is pretty smart, so we hope that she’ll catch up quickly”, said a benevolent headteacher of the school Valentina Korotkova. Already on November 25 Fatema went to school. 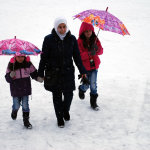 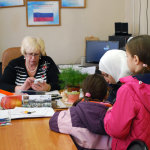 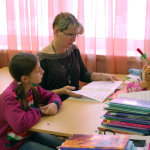 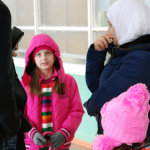 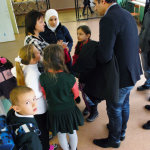 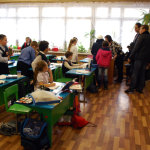 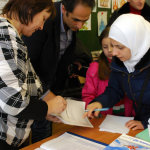 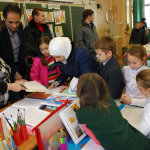 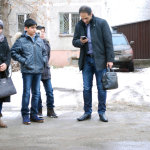 On December 7, we tried to enrol in the same school two other children, a girl and a boy from Alnoaimi family. But this case turned out to be more complicated; children don’t speak Russian at all. School’s headteacher has already found a private teacher of Russian for them, who will prepare children for next school year.

Two teenage girls, Tasnim Alagha and Sana Algha have been admitted to school №9. But they’ll begin to study only after the New Year. Now they were given books to prepare for new school year. Despite the fact, that the eldest is 16 now, and the youngest is 12, they can study only in the 6th and in the 3rd grades respectively; their level of knowledge doesn’t fit their age.

But not everyone had luck. Two boys, Nur Nshavi and Omar Nshavi, didn’t get to school. There is a school №3 at their place of residence, but first and second year classes, where Nur and Omar should go, are full. “We have place in the fifth grade. However, we have tested them and the results proved that children should study in the first and second grades, which are overfilled. In such circumstances, they can be admitted only if we get a direct resolution form the Department of Education”, explained the situation a school’s headteacher Valentina Butova, signing the official refusal of access. This was in November. Civic Assistance Committee employees right after the talk with the headteacher went to the Noginsk  Department of Education and wrote an application asking to find a school with available palces for the children. But in December the family received a formal reply from the Department, which instead of the number of available school contained excerpts from the federal Law “On education” and of Ministry of Education order №32.

The Head of the Department Nataliya Asoskova, already familiar to our Committee, received Civic Assistance employees, but didn’t explain her position. “When she was told, that some children have already been enrolled to schools, she only shook her head sceptically. The conversation was completely unsuccesfull, even though we tried to be polite and correct. The Head of Department wasn’t disposed for dialogue, she spoke toughly and uncompromisingly. I had a feeling that the Department of Education is vehemently opposed to school enrollment  of children of foreign citizens without registration and unclear (to them) legal status”, said Commitee’s employee Konstantin Troitskiy. Organised teaching of Russian to Syrian children was not even mentioned; Deputy Head of Department stated bluntly that families should solve this problem themselves.

“So, it turns out that school headtheachers accept children only if there are no obstacles. And the Department of Education says ‘no’ to every our proposal”, commented Mikhail Kushpel, lawyer of “Migration and Law” Network of Human Rights Center Memorial. “I’m going to wite an application to the Department of Education claiming to provide an opportunity to foreign chilldren to learn Russian. Also I will file an application to the Prosecutor’s Office and complaints to Investigative Committee of the Ministry of Education, and also an adress to Ombudsman in relation to the actions of the Head of Noginsk Department of Education Nataliya Askokova. I believe that she intentionally inpedes the realisation of children’s right to education. Enough time has passed since the problem arose. Now we have a decision of the Supreme Court. Last time we filed a specific application and then received just a formal reply containing excerpts from the laws.” 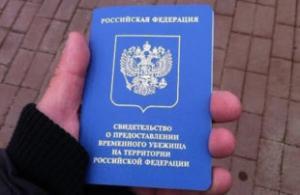 Statistics: People with Temporary Asylum Status in Russia Decreased by Half in 2017 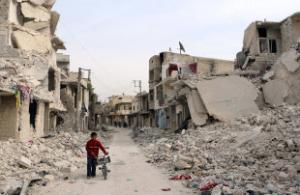 All Is Quiet In Aleppo’ 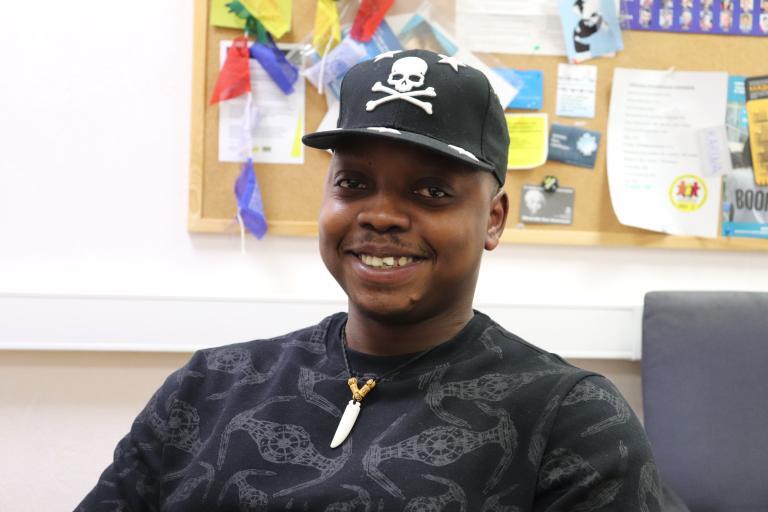